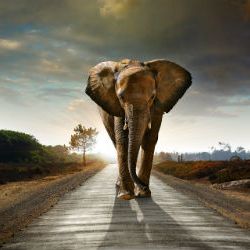 There has been an angry line drawn in the sands of the Southern part of the African continent. On one side you will find a pack of conservationists and biologists demanding action and on the other are a group consisting of politicians and hunters refusing to compromise. Recently the United States lifted its ban on the importation of wildlife trophies such as elephants and this has led to the outbreak of all out war between the two groups who both claim to represent the best interests of wildlife.

What is best for elephant conservation?

Conservationists and animal rights groups argue that the lifting of the ban will lead to increased hunting of a species already under threat and is virtually impossible to regulate on a continent that is riddled with corruption. Hunting advocates claim that the new rules will better manage wildlife populations ultimately leading to better elephant conservation. They also suggest that the cost of hunting an elephant at between US$4,000 to $50,000 will produce revenue which fund better conservation.

Not all of it is down hunting and poaching

In 1972 there were 200,000 wild elephants in Zambia, tragically that number fell to 21,000 in 2016. It is important to remember that you cannot apportion all the blame to legal hunting. In Africa there has been a reduction in both water and food as well as climate change over the last few decades and this has had a significant impact on survival for many species. So, despite the fact that the international community has fought back against the trade in ivory, climate change plays a significant role in the threat of extinction for elephants.

Take action by adopting an elephant

So, what is the best course of action if you care about elephants? The best thing you can do is convert your frustration into action by signing one of the many petitions that are circulating seeking to ban trophy hunting again. You could also purchase a t-shirt from the #BeKindToElephants launched by Ellen Degeneres with all proceeds being donated to conservation of the iconic species. Or you could simply sponsor an elephant with WWF. Regardless of what you do, you need to make sure your voice is heard for the sake of the entire species.