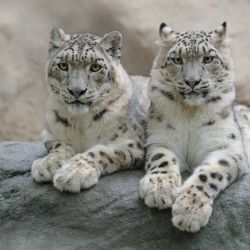 The latest research has found zoonotic pathogens in wild snow leopard blood which is very concerning to people working towards the conservation of the rare big cat. The study was conducted by an international team of researchers who captured 20 snow leopards and found all but one in healthy condition. The study was conducted between 2008 and 2015 by scientists from the Snow Leopard Trust, Snow Leopard Conservation Foundation and other organisations.

The scientists discovered several zoonotic pathogens in the blood samples taken from the snow leopards some of which cause disease in humans and livestock. They also discovered pathogens that can easily be transmitted to humans causing life-threatening infections. Another pathogen found was a parasite with the ability to infect any warm-blooded animal and cause toxoplasmosis. The researchers also discovered plenty of ticks buried within the snow leopards fur all of which carry many other types of potentially zoonotic bacteria.

There are just 4,000 wild snow leopards left and as a species it is highly vulnerable. The species can be found in several Asian countries ranging from the centre of the continent to the Indian Subcontinent. Snow leopards face a number of threats including poaching, human-animal conflict, climate change and habitat loss. The discovery of deadly pathogens in the blood has increased the threat count. The scientists say that surveillance now needs to be constant to monitor the health of wild snow leopards.

There is virtually zero information on which diseases snow leopards are vulnerable to and how common they are. As a result, it is not possible to articulate how great the threat is or how the population may be affected scientists say. They add that other big cat species have been devastated by the outbreak of disease such as the outbreak of canine distemper virus amongst lions in the Serengeti. During that outbreak, approximately 30 per cent of the lion population died. The most likely source of the virus was guard dogs scientists say.

Feral dogs are also a risk

There are an increasing number of feral dogs populating the same range as that of snow leopards and the big cat is probably very vulnerable to new pathogens due to the dry and cold nature of their habitat which results in low microbial activity and diversity. Unfortunately, very little is known about the potential threat from disease to snow leopards, but scientists take comfort in the fact that data is now being collected.