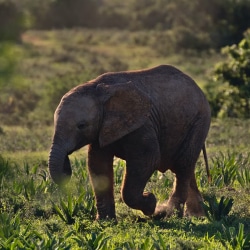 Researchers in Kenya believed that orphaned elephants would be more stressed than those that were not orphaned.

However, the research team made an interesting discovery. There was no difference in terms of stress hormones between the orphaned and non orphaned elephants as long as they had other family members to socialise with. Having other elephants their own age in the group also helps reduce their stress levels. It seems that friendship is a key component to keeping elephant stress levels low.

It was an unexpected outcome as juvenile elephants never stray more than a short distance from their mother. Therefore, orphaned elephants were expected to have higher stress levels as one would imagine they would feel isolated. However the presence of a strong group is key to keeping elephant stress low and ultimately their survival.

This knowledge is useful for rehabilitation centres that handle orphans as they now know that releasing groups of orphans with their ‘friends’ will enhance their chance of surviving in the wild.
The research first took the form of finding out what the survival rates were for orphaned elephants. Which, proved to be lower than those that were still with their mothers. From their the research team decided to look at the orphaned survivors and their stress levels.

To test for stress, the researchers had to gather dung samples. The dung was then tested for stress hormones. The tests were done multiple times, with over 400 samples taken from 37 juvenile elephants, 25 of which were orphaned.

Finding out that orphaned elephants aren’t more stressed was a surprise, however, finding that the orphans benefit from their friendship with others their age was not a surprise. It was known from other research that orphans increase their social behaviour with other elephants their age after their mother’s death.

The research shows how critical the social aspect of elephant groups is. Even after the trauma of losing a mother, elephants find a way to survive and thrive when they have a good group around them.