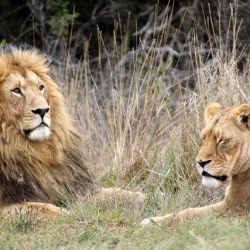 In 1965 a man-eating lion that was featured in Outdoor Life after attacking a Kenyan hunter became famous. That lion was not alone. Many other lions desperate from a deepening drought attacked people in Southern Kenya that year. But this particular lion named Darajani had something curious about him. When he was finally killed, it was discovered that he had a porcupine quill sticking out of his nose.

Researchers examining the carcass found that the quill had penetrated more than six-inches into the big cat’s snout almost piercing its brain. It is almost certain the reason why Darajani became a man-eater was the quill scientists say. With the quill lodged in its sound the lion was unable to hunt effectively, became emaciated and out of desperation likely started hunting humans. That is just one of the conclusions of a study recently concluded of interactions between lions and porcupines.

The study suggests that lion typically avoid hunting porcupines unless there is a shortage of other prey. When they do hunt porcupines, it can result in either severe injury or even death which can prompt lions to end up hunting cattle, horses and ultimately humans. Researchers who conducted the study say porcupines are definitely not the preferred prey of lions so it makes sense that only an injured lion would display this behaviour because humans are slow.

This means it is important for mobile veterinary units to treat lions when they display visible porcupine quills. Nearly seven decades before Darajani attacked his first human, there was a much more famous couple of lions that embarked on a rampage in Tsavo which is less than 24 miles away. It was alleged that during a very brief period of time they attacked and killed more than 100 humans. Their exploits were immortalized in a book and on the silver screen. Both big cats also had quill fragments stuck in fractures within their teeth.

Not the first time

Researchers says that in 1898, there was also a drought and whilst it does not appear that quill injuries drove the lions towards hunting humans, it does suggest that the lions were more desperate than usual. Lions will only ever begin to target porcupines during periods of severe drought and in arid places devoid of large prey. In areas where rain levels are low, porcupines can account for an average of 28 per cent of the diet of lion. Contrastingly in areas where there is more rainfall, porcupines make up less than four percent according to the study.

Younger male lions tend to hunt porcupines more often than other lions. Solo young lions are also more likely to suffer injury because they lack no mates to remove clients. Lions typically groom one another and remove things like quills. One conservationist who served as game warden of South Africa’s Sabi Game Reserve which as eventually renamed Kruger National Park during his leadership echoes the findings and observed the same phenomenon during the early 20th century. He noted that older males were rarely wounded by porcupine quills but younger males in their prime were commonly wounded whilst females rarely if ever commit the same imprudence.