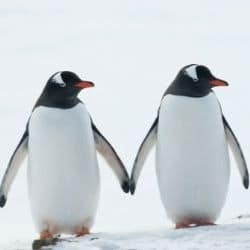 Conservationists have sounded the alarm by saying the Earth’s largest colony of king penguins has seen its population decline by nearly 90 per cent over the last thirty years. The colony resides on Île aux Cochons which is a remote island half way between Africa and Antarctica. The last time researchers visited the island, there were 2 million penguins. Recently satellite imagery and photos suggest that the population has collapsed and there are less than 200,000 remaining.

Conservationists don’t know the reason yet

The reason for the dramatic decline is not known, with researchers saying that it was wholly unexpected and extremely significant because the colony constitutes nearly one third of the entire global population of king penguins. Climate change is probably an important factor. In 1997 El Niño warmed the waters of the Southern Indian Ocean which for a brief period pushed the fish and squid which is the main diet of the king penguin South, well beyond the range the colony feeds in typically. That event probably caused the population to fall and can be blamed for lack of success in breeding for all king penguin colonies in the region.

El Niño is cyclical, taking place every two to seven years, however it’s effect can be amplified as a result of global warming which also produces the same sort of results over a longer time frame. An older climate change study suggests that the island chain that Île aux Cochons is part of will no longer be habitable for king penguins by the middle of the century. The penguins will not be able to migrate either because there are no other suitable habitats within travelling distance.

A few other possibilities remain

Other suggestions for reasons behind the population drop is avian cholera, but until researchers return to the colony next year, they will not be able to say for sure. Invasive species such as cats, mice and rats may have also ended up on the island threatening the population. The king penguin which can stand a metre tall is the second largest penguin species after emperor penguins. Instead of building a nest, the species lays a single egg at a time and carry it with them on their feet which are covered by a flap of abdominal skin. Parents alternate incubating the egg, switching every two weeks over a two-month period.