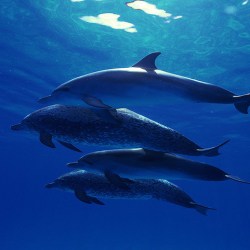 Amongst the cutest mammals in the world is without a doubt is the dolphin. This species is famous for both its friendly nature towards humans as well as its calming look. Recent reports have indicated that one particular dolphin does not use its blowhole but instead use its mouths to inhale. The blowhole is located on the top of the dolphin’s head and is considered to be the nose of the species. It is used to help exhale and until recently was also thought to be used to inhale when they surface.

However conventional wisdom is being challenged by researchers from the University of Otago who are suggesting that the species uses its mouth to breath rather than its blowhole. Recently a dolphin was seen off the coast of New Zealand that was clearly using its mouth to breathe. The scientists wrote that the dolphin was continuously surfacing from the ocean with its head surfacing much higher than the water level. The dolphin’s blowhole which should have been open actually remained close and it could clearly be heard that the dolphin was using its opened mouth to breathe.

We still don’t understand why

It is very unusual for dolphins to use their mouth’s to inhale oxygen, but this particular Hector dolphin has been seen many times using its mouth to breathe and is rarely seen using its nose whilst it is surfing in the ocean. The researchers have been unable to determine why the dolphin breathes the way it does. One possibility could be the dolphin has damaged muscles or there is an object obstructing its blowhole. So far no real explanation has been found.