Possible Solution To Save Northern White Rhinos From Extinction 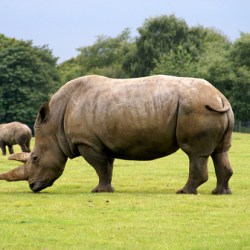 The Northern white rhino is on the brink of disappearing for good. There are only two members of the species that remain, a mother and daughter both of whom live under 24-hour protection in Kenya to guard them from poachers. There are a couple of Northern white rhinos residing thousands of miles away in San Diego Zoo. Edward and his mother. Edward took his first steps a couple of months ago and created history as the first Southern white rhino born in North America through artificial insemination and frozen sperm.

A spokesperson for the zoo described the birth of Edward as amazing and added that he is both active and healthy. The birth of Edward acts as confirmation for the theory that Victoria could one day serve as a surrogate mother for the embryo of a Northern white rhino, helping it return from the brink of extinction. The next step is for rhino skin cells to be transformed into stem cells.

Stem cells are important because they have the capacity to transform into any cell in the body. The final goal would be to redirect them all the way to sperm and eggs. So far, stem cells have been transformed into a beating cardiac muscle that forms part of the heart using extremely complex technology. The work is being carried out at San Diego Zoo’s “Frozen Zoo” which is the largest genetic bank in the world, containing samples from roughly 10,000 animals.

The Zoo spokesperson admits that implanting an embryo from a Northern white rhino in Victoria is many years away, the entire team involved in the project feel the mission is personal. They say they feel a responsibility being part of the species that helped cause their extinction. Edward recently made his public debut whilst Victoria is displaying her maternal instincts. Keepers say Victoria is a helicopter mum, unwilling to take a rest whilst Edward runs around, but sitting on top of him, making sure he is okay.