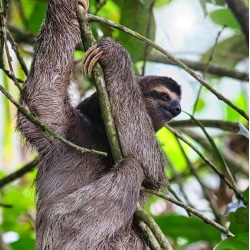 Belen Market in the Peruvian Amazon is a notorious wildlife market. It was forced to shut as part of a recommended shut down of animal markets during the Covid-19 pandemic. However, the market is back and the illegal sale of wildlife has returned.

Before the pandemic hit, the market was alive with activity. Many of the stalls selling animal related products. Sloth paws, turtle meat, and leopard skins are just some of the items that could be found alongside herbs, and craft items. Over 200 species of wild animal, living and dead were illegally for sale.

Following the outbreak of the Covid-19 the World Health Organisation, the World Organisation for Animal Health and the United Nations Environment Programme called for a shut down of marketplaces selling live wild mammals.

Covid-19 has highlighted the connection between the wildlife trade and diseases that spread from animals to humans. Despite that link being well documented, it is so far unclear as to whether the pandemic has slowed the buying and selling of wild animals or forced those involved to change their ways.

Chance to make a change

The Belen Market in Iquitos Peru sits on a 16 acre site. Its bustling daily life was no doubt a source of transmission of Covid in the region. Iquitos has been hit hard by the pandemic. It has infected at least 70% of residents, one of the highest infection rates in the world.

Subsequently the Belen Market was shut down. The government went in and bulldozed 2500 stalls. They also set a five year plan to modernise the market to promote better living conditions in this remote part of Peru. It was a chance to make a break from the old ways.

This summer, following months of work, the market re-opened. However, an eight week investigation by World Animal Protection revealed the illegal selling of wild animals and their body parts had resumed. The investigators found dead caimans in the walkways, live parrots in cardboard boxes, and deer meat for sale. It seems the best intentions have fallen by the wayside, and old ways are returning.

Hunting wild animals for a living is illegal in Peru, but selling those animals in markets is not. Live animals are sold for pets or for food. People buy live yellow-footed turtles, for example, and slaughter them later. Animal parts – jaguar teeth, sloth claws, pink dolphin genitalia, are sold for use in traditional medicine, domestically and internationally, or as luxury souvenirs.

The environment sector of the National Police of Peru have said they lack logistical support to clamp down on such activity.

It is hard to make people in the area care for the nature that surrounds them. The trade in animals has been happening for years, and is their livelihood. If anything the pandemic has intensified the trade, as this region is not wealthy, and Covid-19 devastated the area economically.

The desire for the trade in Amazonian animals is not just local. The international demand, mainly from China, for items like jaguar skins and teeth continues to fuel the trade. Sellers can demand high prices for such items. The issue is clearly not just one of trying to educate the locals to the value of the animals being left alone in the wild, it is also one of clamping down on the desire for these items at the source within the consumer countries.

Wild animal markets are clearly a huge concern for animal welfare and our own health. The animals are largely mistreated and contained within poor living conditions. They are in close proximity to one another, which creates conditions within which viruses can flourish and develop.

Tests done on some of the meat sold within Belen market found multiple strains of salmonella in a third of the meat tested. With nearly half of the strains resistant to antibiotics.

World Animal Protection’s investigation found no evidence that the plan to overhaul Belén Market involved clamping down on the wildlife trade, despite mounting concerns about the risk of disease caused by the wildlife trade and the fact that improving health conditions was a key goal.

The rebuilding of Belen market was a UN backed initiative, and it was a great opportunity to do things better. It was a chance to make a break from illegal activities and from fostering an environment that was catastrophic for the wellbeing of the animals but also for humans. It is a great shame that even within the ongoing pandemic the market is being allowed to continue as before and highlights the problem is far greater than physically reconstructing the market. The issues are deep rooted and will take an immense ongoing effort to fix.