Orangutan Rescued After Being Shot 74 Times With Air Rifle 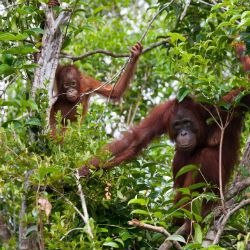 Back in May an orangutan named Hope was found blinded having been show by an air gun more than 70 times on the Indonesian island of Sumatra. According to the Sumatran Orangutan Conservation Programme (SOCP), Hope was severely injured and was found along with her month-old infant who subsequently died of its injuries. After being rescued, Hope underwent immediate emergency surgery having been found in a near death condition in Subulussam.

SOCP as its name suggests is an organisation that is dedicated to the protection and saving of both captive and wild Sumatran and Tapanuli orangutans. The organisation posted pictures and wrote a Facebook post showing Hope receiving treatment and an X-Ray which was meant to illustrate the sheer number of times Hope had been hit with air bullets. Hope was found with a broken collarbone, bone fractures and blinded.

According to SOCP Hope was found with 74 air rifle bullets lodged in her body and what is most heartbreaking is the damage Hope suffered to her eyes leaving her completely blind. The veterinarian who examined Hope is optimistic that she will survive but says it will not be possible for Hope to return to the wild. Apparently only 7 of the bullets lodged in Hope’s body could be removed because of fears of doing further damage to her collarbone as well as a desire to prevent infection.

SOCP is extremely concerned about Hope’s ability to recover mentally having lost her baby during the breastfeeding period. The baby orangutan succumbed to its injuries on the way to a quarantine centre because of severe trauma and malnourishment. The IUCN estimates there are less than 14,000 wild Sumatran orangutans and the species is considered critically endangered.

Threats to endangered species in Indonesia have increased as palm oil plantations and paper production has cleared jungle habitat in the country. Deforestation has resulted in orangutans coming into further conflict with farmers and plantation workers who kills them to keep their crops protected as well as for meat.