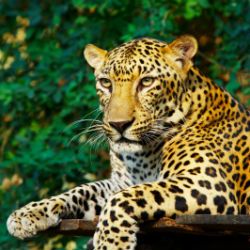 Recently an American based group calling itself Safari Club International shared an image of a female big game hunter on social media proudly showing off her leopard kill. Rather unsurprisingly the image caused a great deal of outrage not just amongst animal rights activists but celebrities joined in the bashing too. Naomi Campbell expressed her horror after conservationists said they believed the big cat was the ninth largest leopard ever hunted.

Anti-poaching groups have launched social media campaigns urging followers to find the woman responsible for the kill as well as call Safari Club International and express their anger. Rather surprisingly the campaign has gone viral attracting 42,000 comments and close to half a million shares. Many ask the question how people can take pride and pleasure from killing a beautiful large male leopard and others say the woman who made the kill should be ashamed.

The issue has now become a cause celebre and there is a demand for the woman to be properly identified. This latest example comes hot on the heels of a killing of a rare 18-year-old giraffe by Ms Tess Thompson Talley who shared an image of herself standing over the dead giraffe. Ms Talley who also hails from the US said the kill was an answer to her prayers. She said she spotted the rare black giraffe bull and knew it was the one.

What about Cecil the lion?

Rather unsurprisingly Ms Talley also faced a backlash after those images and her bragging were shared on social media. In response to the backlash Ms Talley retracted her comments regarding how rare the giraffe had been and then complained about the level of online abuse she had received as a result of her kill. Both hunters bring back memories of the dentist from Minnesota who generated global outrage after killing the much-loved Cecil the lion whilst on a trophy hunting trip in Zimbabwe.