Everything You Need To Know About Black Leopards 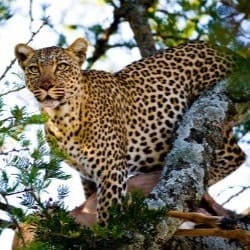 Recently Nicholas Pilford a conservationist from the San Diego Zoo spotted a black leopard in Kenya’s Laikipia area. There have been several reports of black leopards in Africa but few of the sightings have actually been confirmed. In 2017 there was a global review undertaken of black leopard observations which found that sightings had been reported in South Africa, Kenya, and Ethiopia going back to 1909, however the only sighting that was ever confirmed was in Ethiopia.

Not a lot of data

When it comes to leopards there really isn’t a lot of data floating around. The number of leopards globally is unknown as well as the population for many leopard subspecies. The only difference between a black leopard and other leopards is the colour of its coat which is the product of a genetic variation known as melanism.

Generally black leopards are found more frequently in densely forested habitats and there have been far more confirmed sightings of them in South East Asia. In the Malay Peninsula for example, more than 90 per cent of leopards are black. Based on what experts do know about the preferred terrain of black leopards, it is predicted they are likely to be present all across the equator throughout, Western, Central and Eastern Africa.

Central Kenya’s Laikipia County began its leopard conservation program almost two years ago and the goal was to determine the population and status of leopards in the area and to help mitigate the conflict between humans and leopards. As part of the research, the number of black leopards’ observations started to be recorded last year. Since the records began, there have been three confirmed individual black leopards in the study areas suggesting that the leopards are far more common than was previously thought.

Melanism is caused by a genetic mutation that stops the gene responsible for regulating the production of melanin. This means the leopards starts overproducing a pigment turning its coat black. The coat continues to have all the same features as a non-melanistic leopard leopards such as spots, the scientific name being rosettes. It is believed that black leopards persist in dense forests because of the additional camouflage against shaded or dark backgrounds.

Therefore, it is notable that research has confirmed the presence of black leopards residing in open arid environments in Kenya where there is limited shade and raises questions whether their colour in an arid environment impacts hunting strategy, mating and reproduction.  Leopards face a variety of threats such as poaching, human conflict, loss of prey and habitat destruction. These threats affect all kinds of leopards including black leopards.