Everything You Could Want To Know About Jaguars 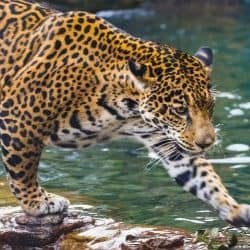 The word jaguar originates from an indigenous language, with the original word ‘yaguar’ which means ‘he who kills with one leap’. The species roams all the way from South-West USA throughout South America as far a Northern Argentina. Unfortunately, they have been almost wiped out from half of their historic range. Jaguars continue to remain robust in Brazil which is estimated to contain about half of the approximately 170,000 jaguars left in the wild. Most of the jaguars in Brazil can be found in the Amazon rainforest and Pantanal, the largest tropical wetland.

Of all the big cat species, the jaguar is the third largest after tigers and lions. They can grow up to 1 metre 70 centimetres not including their tails which can measure up to 80 centimetres. Male jaguars can weigh as much as 120 kilograms or 19 stone. The size of jaguars depends on which region they come from. Jaguars from Central America can be as little as half the size of jaguars roaming the Pantanal. This is because jaguars from the Pantanal need the size to take on larger prey.

Jaguars are often mistaken for leopards but it is possible to tell the difference by their rosettes. Jaguars have black dots in the middle of some of their rosettes whilst leopards do not. Jaguars also tend to have larger and rounder heads with shorter legs. Some jaguars are also melanistic which gives them a black appearance. These jaguars are known as “black panthers”. Unlike most other domestic cats jaguars don’t avoid water and can be found living besides pools of water such as lakes, rivers and wetlands. They are confident in the water and have been known to cross large rivers.

Will take down anything

Jaguars of both sexes roar which is the way they communicate with one another when seeking out mates. The name for a jaguar roar is saw because it sounds as if a piece of wood is being sawn off. When two jaguars meet, they greet each other through a noise that sounds like a nasally snuffling. Jaguars hunt opportunistically and will predate on almost anything that crosses their path. They have been known to take on the largest animal in South America, the tapir as well as other massive predators such as caiman. Jaguars are comfortable hunting during both day and night and travel up to kilometres at night whilst hunting.

Of all the big cats, the jaguar has the most powerful bite, their teeth are sharp and jaws strong enough to tear through the thick hides of crocodilians. They require the power to take down prey three or four times their own weight. They usually kill with a bite to the back of the skull instead of biting the neck or throat like other big cats do.  Breeding jaguar pairs can mate up to 100 times a day with pregnancy lasting for around 14 weeks. Females usually give birth to a couple of cubs, though they can deliver as many as four.

The primary threat jaguars face is deforestation which is high in South America as a result of logging and forest clearing for cattle ranching. Not only are jaguars losing their homes, but their populations are becoming isolated making it harder for them to breed. Less habitat means reduced prey with over a quarter of their having depleted numbers of wild prey. This inevitably means they end up hunting livestock only to be killed by humans in retaliation. Jaguars are also poached despite that being illegal.