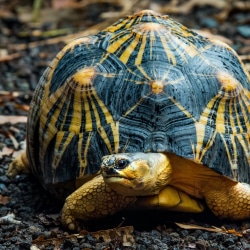 A thousand critically endangered radiated tortoises have been released into the wild in Madagascar. The release was part of a project that aims to boost the tortoises numbers as well as support the forest habitat in which they reside.

The radiated tortoise is native to Madagascar. However, since 2000 the numbers have dropped from around 12 million to just 3 million. The speed of the decline is why they are listed as critically endangered. Predominantly the drop off is down to poaching.

Adult tortoises are captured for their meat. Younger ones are kept alive and sold illegally, mostly in Asia. In addition, the tortoises are threatened by habitat loss as their native forests are cut down to make way for agricultural land.

About 25,000 radiated tortoises have been rescued from poachers by the Turtle Survival Alliance. The rescued tortoises are protected in secure enclosures at various locations in Madagascar. As part of a programme to return them to the wild the Turtle Survival Alliance recently moved 1000 tortoises to a location near the town of Tsihombe in southern Madagascar. Forty of the tortoises have been fitted with satellite tags so that they can be tracked after being released.

The tortoises play a key role in the ecosystem in Madagascan forests because they disperse seeds allowing plants to grow and spread throughout the forests. Without the tortoises the balance of the forest ecosystem would be under threat and that could be a disaster for local flora and fauna alike.