Check Out This Video Of Leopards Fighting Over A Warthog 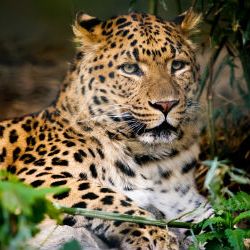 Not every warthog lives a cared free a life as Pumbaa from the Lion King. Certainly not when there is a leopard clawing at your back.  Fortunately for this hefty warthog a second leopard entered the picture providing the perfect opportunity to escape. The whole tense encounter was captured by a guide who was taking a guest out on game drive in South Africa’s Pilanesberg Game Reserve. The tour had been unremarkable until the guide caught wind of a leopard sighting and tried to investigate, arriving only after the big cat had disappeared into the tall grass.

The guide then stopped beside to young warthogs and sought to explain to her guest that the species is a typical target for predators. Before she was able to finish her first sentence, the guest shouted “there’s a leopard” The guide turned around and saw a leopard straddling a very large warthog with its teeth sunk into its back in a bid to take down the animal. The leopard hung on to its prize and sought to obtain a better grip. The warthog naturally began to screech and buck in an attempt to shake off the big cat.

A second leopard entered the scene attracted by all the commotion. The leopard was also a big male that crossed the road and began marching towards the squealing warthog. The leopard paused to smell his surroundings and then proceeded towards the bush where the squealing was emanating from. Before being able to reach the warthog the first leopard attack, apparently because it was not very keen on sharing his meal.

Leopards attack each other

For a moment there was a pause with both leopards eyeballing one another, then the claws came out and a fight broke out. Whilst the two big cats fought over a meal, the lucky warthog made its escape and sneaked away, but it was clearly injured by the leopard attack and it is unknown whether the leopard survived though it has a very good chance of having done so thanks to its considerable size. The game reserve guide said the whole experience was a rush of adrenaline.