Captive Dolphins Are Happy In The Company Of Humans But Does That Mean We Should Keep Them? 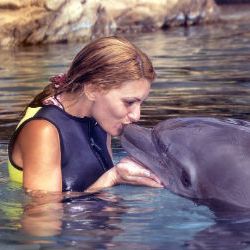 Scientists working with dolphins at a French marine park are trying to measure how they feel about different aspects of their captive lives. The researchers say this is the first time anyone has ever sought to examine captivity from the perspective of the animal. The scientists were trying to determine what activities the dolphins looked forward to the most. What they found is the dolphins most keenly anticipated interacting with humans they were familiar with.

The study was part of a three-year project designed to measure dolphin welfare whilst they are in captivity. The researchers designed experiments to decode the behavior of the marine mammal, seeking to look for physical postures that suggested how the dolphins felt. The team wanted to find out which activities captive dolphins like the most. To do that they tested three activities, a trainer coming and playing with the dolphins, adding toys to their environment and a control where the dolphins were left alone.

The results are interesting though hardly a surprise. All dolphins look forward to most is interacting with a familiar human. They displayed their anticipation by “spy hopping” this is when the dolphin peers above the surface and looks toward the direction that their trainers usually approach them from. The dolphins would also increase the amount of their activity and spend more time at the edge of the pool. The researchers say this behavior has been seen in both zoo and farm animals as well which means that a better human-animal bond equals greater welfare.

The morality of whether it is ethical to hold dolphins in captivity has been a source of contention particularly in France. Recently the French government reversed a proposed ban on captive dolphin breeding at marine parks. Marine park administrators were extremely relieved by the lifting of the ban because they claim allowing dolphins to breed and raise their young is a very important part of what constitutes a happy life for a captive dolphin, though it is completely different to life in the wild. Park administrators claim that wild dolphins are happier in the oceans whilst captive born dolphins are happier in captivity.

Is it a good idea to keep dolphins captive?

Experts say however, that it is not possible to tell whether a dolphin in captivity is really happier than it would be were it in the wild. They add that whilst it is important to learn that captive dolphins seek out human contact and this finding can be applied to the management of other intelligent species, just because a dolphin chooses to interact, doesn’t automatically imply that it would choose a captive lifestyle if given a choice.